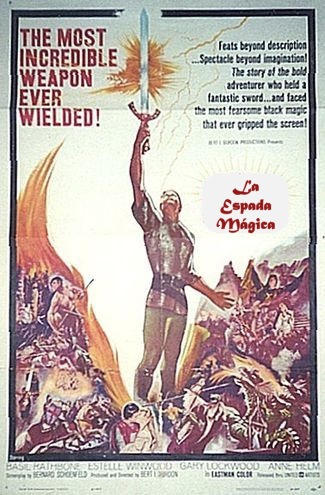 Lodac, an evil wizard, has kidnapped the Princess Helene and intends to feed her to his dragon in seven days. One of the king’s knights, Sir Branton vows to rescue her, despite being warned of Lodac’s seven curses, which have to be encountered before they can reach his castle. A boy named George, who was raised by Sybil, a slightly incompetent sorceress, who is smitted with the Princess wants to rescue her but Sybil whose family had battles with Lodac and lost refuses to let him go. But he uses the magic sword that she intends to give him to detain her while he goes to save the Princess. So he and six knights that Sybil created to be his allies go to the king and offer to accompany Branton and if he should save the Princess wishes for her hand in marriage. Branton is not pleased but is implored by the King to bring them with him. But Branton plans to use them as pawns to evade the curses but George with his sword and other armaments that Sybil manage to defeat them. The evil sorcerer Lodac captures Princess Helene and whisks her off to his castle. Young George has been enamored of Helene from afar, and aided by a magic sword given to him by his sorceress stepmother he sets off with his six knights to save her. However, he must travel with Sir Branton, who also has romantic aspirations for the Princess. Together the knights must face Lodac’s seven curses and liberate the Princess.